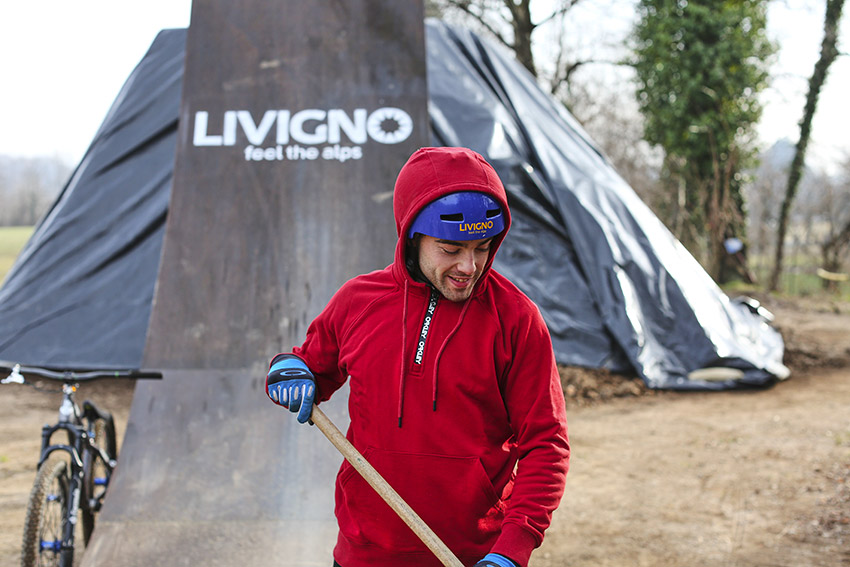 Who is Diego Caverzasi? We spent an afternoon with him and saw his bike up close!

Describe yourself with three adjectives.
Accurate, calculated, and crazy! Ahahah
How long have you been cycling/when did you start?
I’ve been cycling since ever since I was 2. At the age of 8, I discovered this sport, and I started practicing in a small park a couple of minutes far from my house. At 12, I competed in my first contest at the same park. I met other riders from all over Italy and learned about other competitions.
In the following years, I started going around Italy and taking part in different contests.
In 2010 for the first time, I competed in the FMB World Tour at Riva del Garda, which allowed me to collect my first points in the ranking to participate in other events around the world.
Your strengths and weaknesses?
To practice this sport, you have to be convinced of what you are doing, do not have second thoughts, and do not fear the consequences. I’m stubborn, bold, and daring. Those three features are my allies in the sport but enemies in my day to day life.
It’s hard to work out every day, being focused on the outcome and, at the same time living your day to day life. 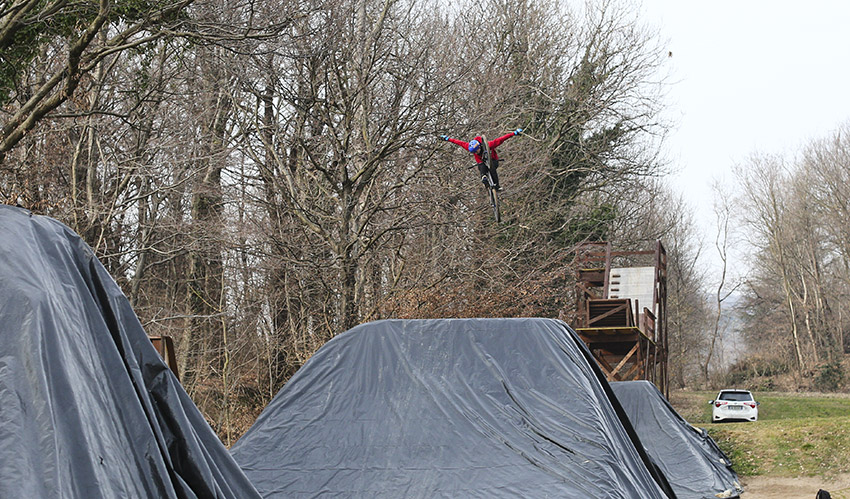 How many bikes have you had? Which one did you bound with more? Do you name them?
I have no idea, probably way too many since I change at least two bikes per year. As for the Dirt bike, my favorite is the one I’ve used during the season 2018, the Beddo Sway. The designer, Marius Hoppensack, is a good friend of mine, and a mountain bike legend, with some of my tips, has realized the best frame ever.
Favorite trick?
In the last years, I’ve grown fond of the Frontflip. ;D
It’s a rotation that I’ve learned in 2010 and hated it for four years, but now we are good friends!
Considering the difficulty and the time spent learning this trick (approximately seven years), and its rarity (only 4/5 bikers know it in the entire world), I’ll say that my favorite trick is the Frontflip tailwhip!
What do you install on your bike?
Only the best, guys! From this year I’m running for Giant Italy so now I’m waiting for the Dirt bike, but the rest remains the same.
Currently, the frame is a Beddo Sway, Industry Enduro 305 26’’ tires, which run beautifully…
HT AE03 pedals for a perfect grip and the least weight possible, Formula 35 fork, appositely studied for me with a specific hydraulic.
Formula Cura brake with two pistons to stay light, that I mount with Trixer Trick stuff or the so-called gyro or rotor BMX, but this is hydraulic!
Last but not least, Sensus knobs, soft and perfect for my small hands. All the other components are from different brands but all in carbon or the lightest on the market. Light but not easily breakable, of course! 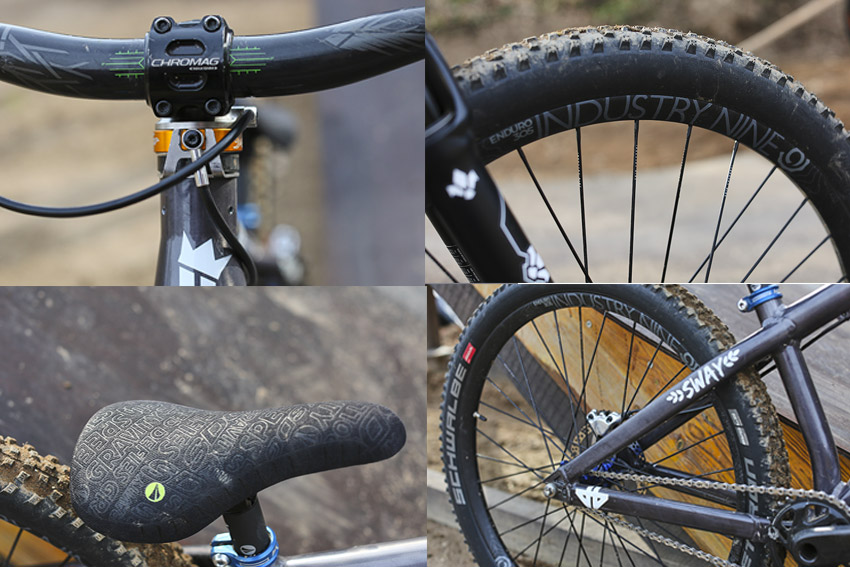 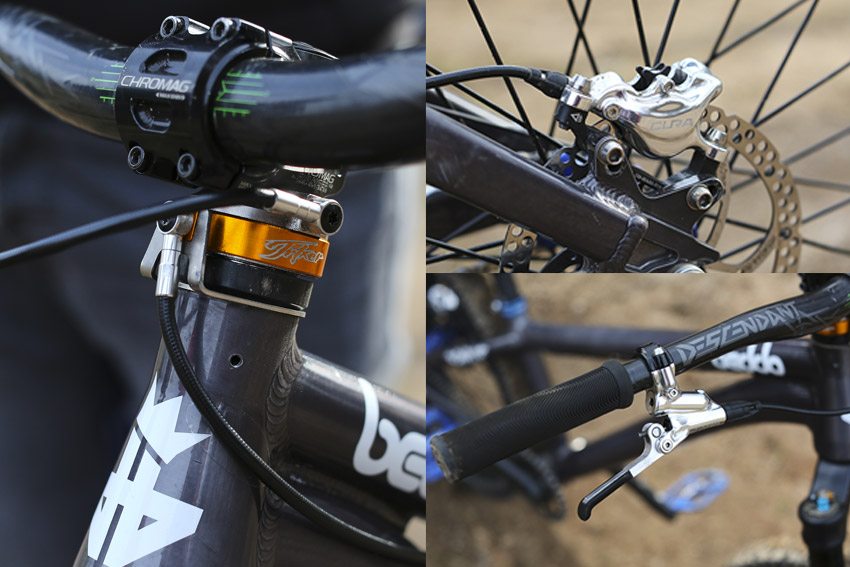 The question of the year, 29’’ or 27.5’’?
I like the 26’’ hahaha, but we cannot stop the progress! I’ve never tried the 29,’’ but according to my hight and the way I use and play with the bikes,27.5’’ for me is more than enough.
2019’s best memory
Honestly, I don’t remember! Hahaha. Probably the exact moment I landed from the last step down at the Joyride. 2019 wasn’t a good year competition-wise; there were a lot of injuries, falls, and wasted runs for a missed trick, lots of moments that made me lose points in the ranking and some confidence.
That time at Whistler, I felt finally right, and after a couple of months, I was able to complete the run as planned and without mistakes. I was in heaven while riding down to the end of Boneyard towards the public and screaming like crazy!
Tell us about your worst fall
Worst fall. I fell severely several times and also broke some bones, but the worst fall, fortunately, did not cause any injury. It was the one at the Crankworx in Innsbruck in 2018. At the final, during the first run, I wanted to place in the middle of the ranking and make as many points as possible in case the second run went terrible.
So, I started with a basic run for my level, and I was chill, maybe too much. At the fifth jump, at the right hip, I was supposed to do a flip whip (an easy trick for me), but I was so loose that in kicking the frame, I left behind the right leg, which hit the back wheel slowing down the tailwhip. The whole rotation became odd and unusual, but I was still feeling in control because I managed to localize the mistake. Unfortunately, when I went to put the foot on the pedal, I completely missed it for my wrong position. The leg went between the frame and the front wheel, and at that moment, I shit my pants! While falling, I remember thinking of breaking both legs.
I landed almost straight, lost the balance, and was thrown on the ground, falling on my right shoulder blade and back of my neck. I fainted for the impact for 20seconds and woked up to the medical staff approaches. Once I’ve realized that there was nothing broken, I stood up and was feeling almost fine except for the hearting shoulder. I went to the bike to complete the second run, but 10 minutes later, I almost completely lost my vision and was having an excruciating headache.
I regain my sight 2 hours later, and the headache lasted four days!
What are your plans for the next season?
My current situation in the FMB is not the best. Last year I had an injury at Rotorua, and I did not compete in the finals; as a consequence, I lost points and landed 17th in the ranking, but to be able to participate in the Crankworx, you have to be in the first 12.
Being the main goal positioning myself among this 12, I have to do my best in the next Gold of the season to assure my spot in the general ranking.
I also am going to focus on the freeride. I have ideas for the future.
Would you like to go to Rampage?
Yes. I want to go someday; I’m working on it. The video project is just the beginning of the path that will allow me to get there. Then the Proving Grounds, which last year was the qualification for the Rampage with three spots available.
Once there I’ll have to play my best to be there this year, if not I’ll try again next year. 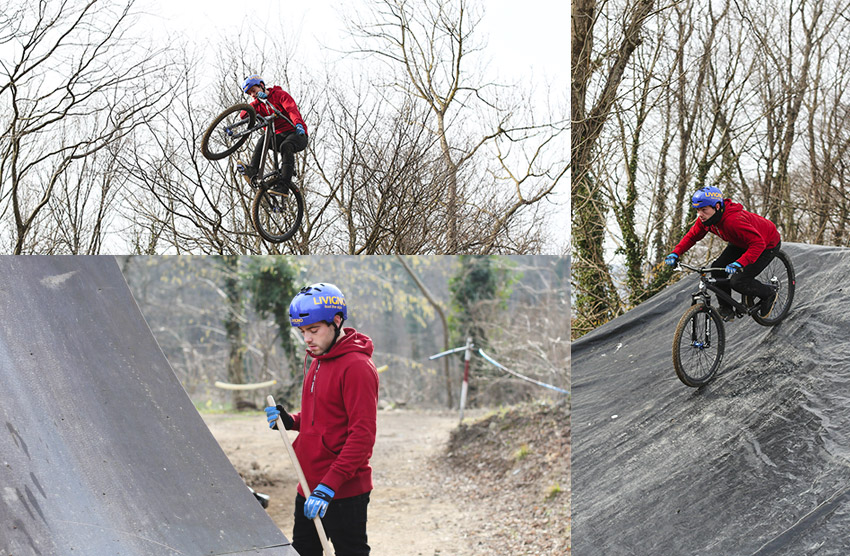